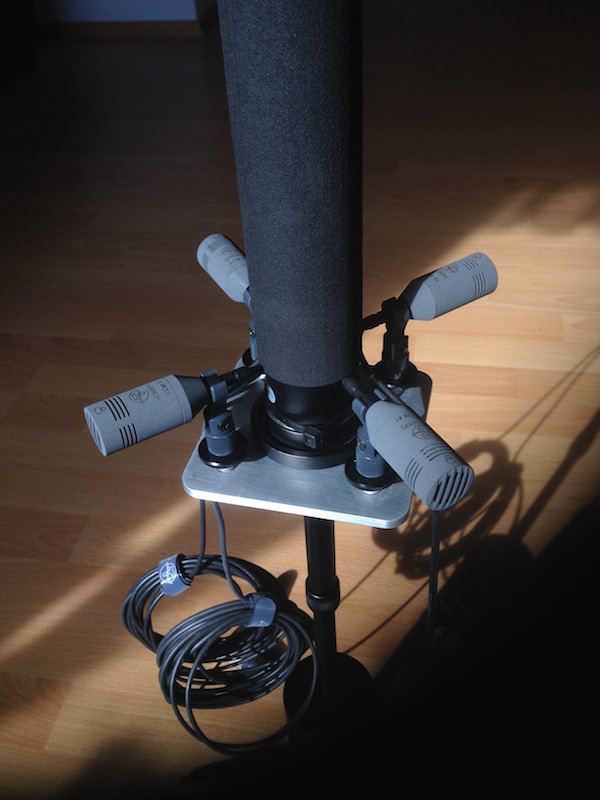 Those who know me know that high-quality sound is one of my absolute passions and I am constantly aiming for better solutions. In this regard, I am looking for ways to include surround sound into my Atmosphaeres, however, it turns out that this is not so easy. There are a couple of approaches, like the Free Space Omni-Binaural microphone  that features 4 pairs of binaural microphones and this is what a lot of the big 360 video production houses (e.g. Felix & Paul) use, however, I have a couple of gripes with this solution. For one, it is very expensive, namely $2499 for the base version that uses 8 Primo EM172 microphone capsules. For an upgrade to 8 DPA 4060 Capsules you have to factor in an extra $3000, so that’s a total of $5599 if you want the top model. That in itself is not such a bad price if you would actually get really good sound quality, however, the samples that I have heard from the DPA 4060 aren’t really convincing me that these are low-self-noise microphones. However, you always have to keep in mind that I am looking at this whole thing from the perspective of a nature sound recordist since that is where I come from. So naturally I am looking for microphones that have very low self-noise and the DPA 4060 just don’t seem to solve this for me. Others might have different opinions but I have yet to hear a sample that convinces me.

Another thing that I’m not sold on is the idea of 4 binaural microphone pairs. While I love the concept of binaural sound recordings when used with headphones, I can’t see how this concept will work in a surround sound Virtual Reality environment because the sound will always only be ‘right’ when the person looks exactly in the direction of one of the ears of the binaural microphone pairs. However, what happens if you look at a location that is at 45° between two binaural ear pairs? It sort of reminds me of the current attempts of stereoscopic 3D 360° videos where you have 3 pairs of GoPro cameras at an 120° angle to each other. While the stereo effect is really good when you look directly in the direction of one of the camera pairs (0°, 120°, 240°), the effect vanishes the more you look in between these ‘sweet spots’, going back to a 2D video. So the brain constantly has to switch between 3D and 2D depending on where the viewer turns their head. While this might be not too bad in a quick demo, over time that switching leads to headaches, at least for me.
To me it seems like 3Dio’s Free Space Omni does the same thing for the ears. However, I’d be happy to be convinced otherwise, just not at this price point and with questionable self-noise for my use as a nature sound recording solution. Lastly, even if these two reasons were not a problem, there’s another reason that keeps me from jumping onto this high-profile bandwagon and that is that I don’t know how to mount the 3Dio microphone underneath my 360 video cube. Even if I could mount it close to the monopod on which the 360 video rig is mounted, this monopod would interfere with the sound pickup of the binaural ears. Maybe 3Dio will solve this by providing a 3/8″ screw on the top and bottom plates so we can mount the mics along (or as part of) the monopod axis, however, I don’t see that happening any time soon. So for now, a Free Space Omni-Binaural microphone is out of the question for me and the search continues.

I could write more about ambisonic solutions like the TetraMic and other solutions, however, today’s topic is the custom built IRT cross that Schoeps sent me this week.

Thanks to Sebastian-Thies Hinrichsen from fieldrecording.de I was reminded of the great microphones that Schoeps produce and while Sebastian and I originally thought that the Double M/S system would be the best solution for use together with a 360° video recording rig, Schoeps CEO Helmut Wittek recommended in a personal Skype conversation an adapted version of their IRT cross. And this is what Schoeps have sent me last week, together with 4 CCM 41 microphones and a couple of other required bits and pieces. The total tally of this rig comes to about €7300 so I was very keen to try out this custom built solution. The following pictures show you a little bit of the unboxing but more importantly the mounting plate as well as the microphone positioning and the overall fit on the 360 video rig. 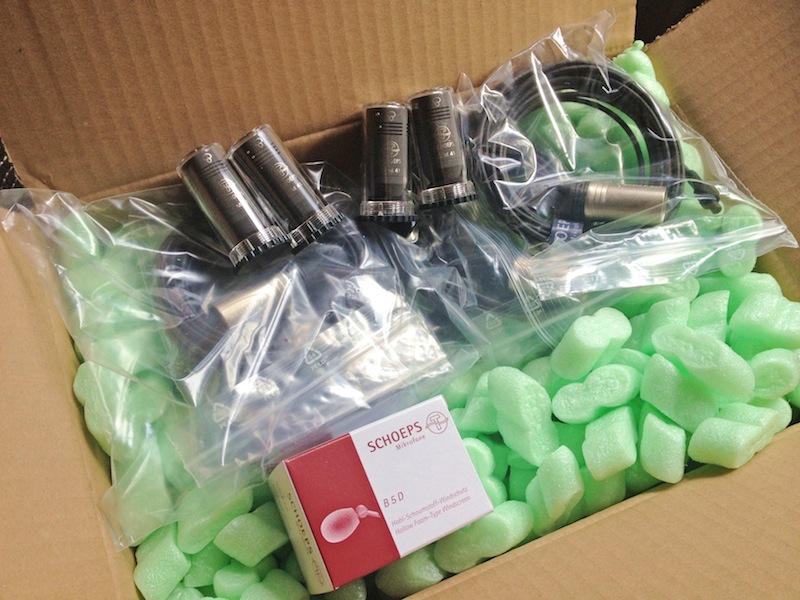 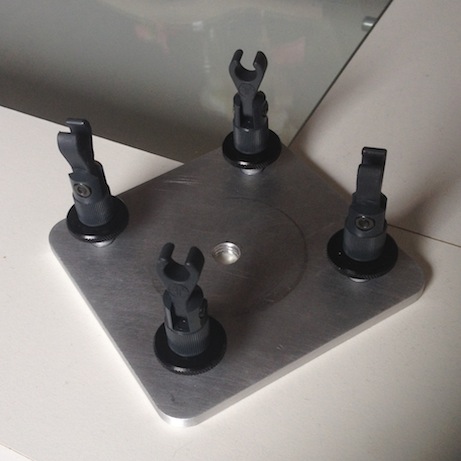 Fig. 2: Custom made IRT cross – This is the mounting plate that Schoeps made for us 360 videographers, together with the microphone clamps 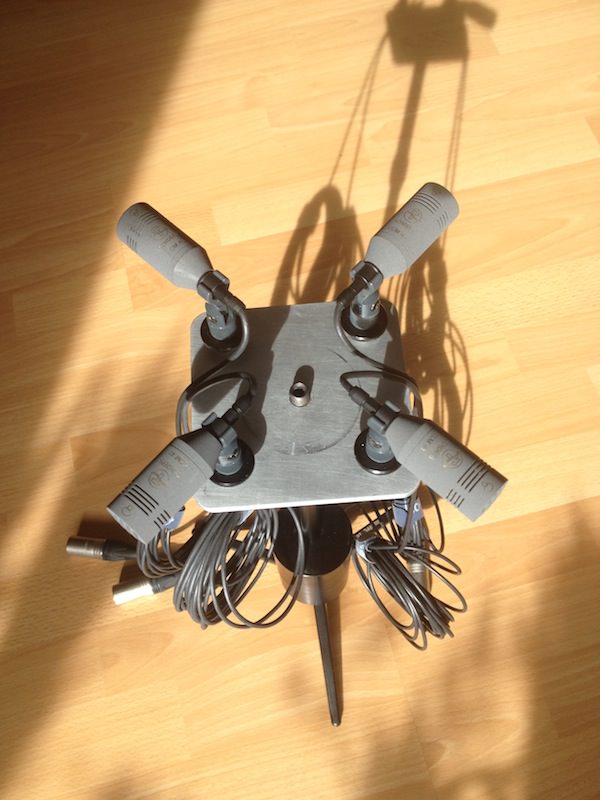 Fig. 4: IRT Cross with Monopod for 360° video attached in the centre 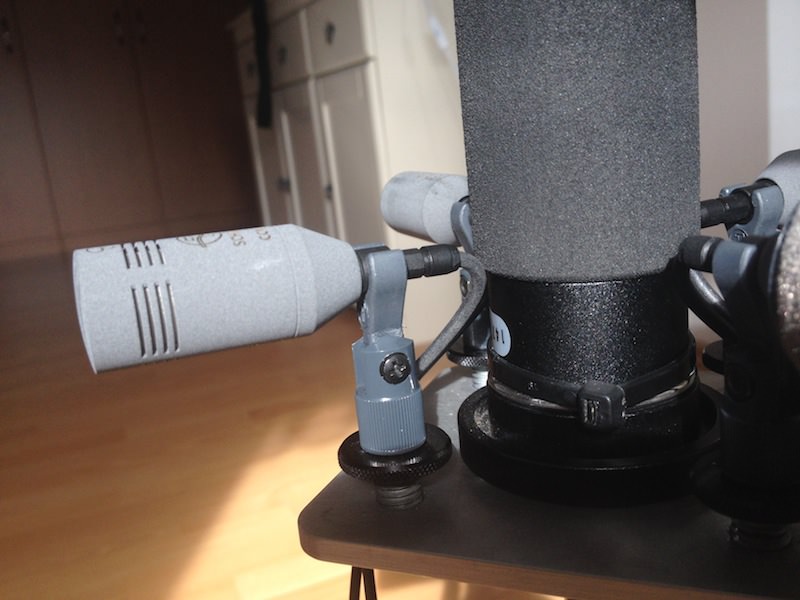 Fig. 5: The microphonecables go pretty close to the Monopod 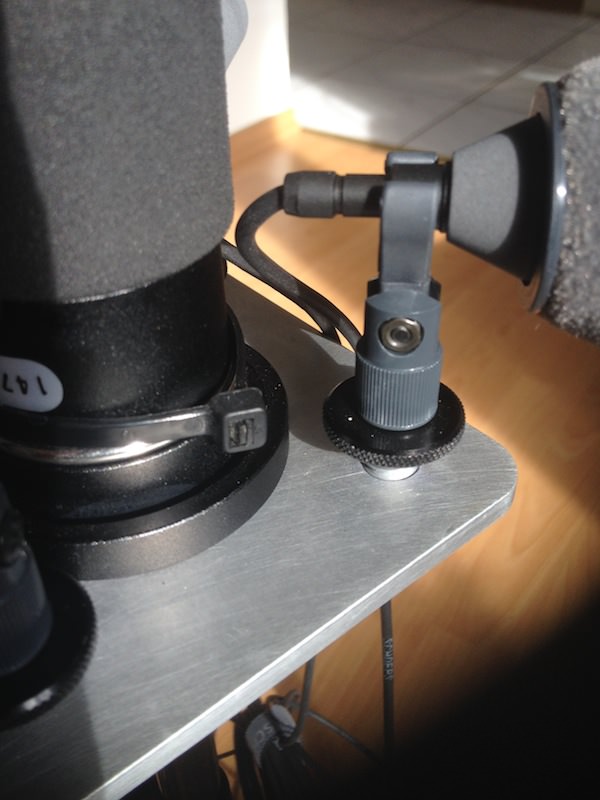 Fig. 6: Another view of the cables close to the Monopod

Fig. 7: Top view of the IRT Cross with monopod, microphones and windshields installed 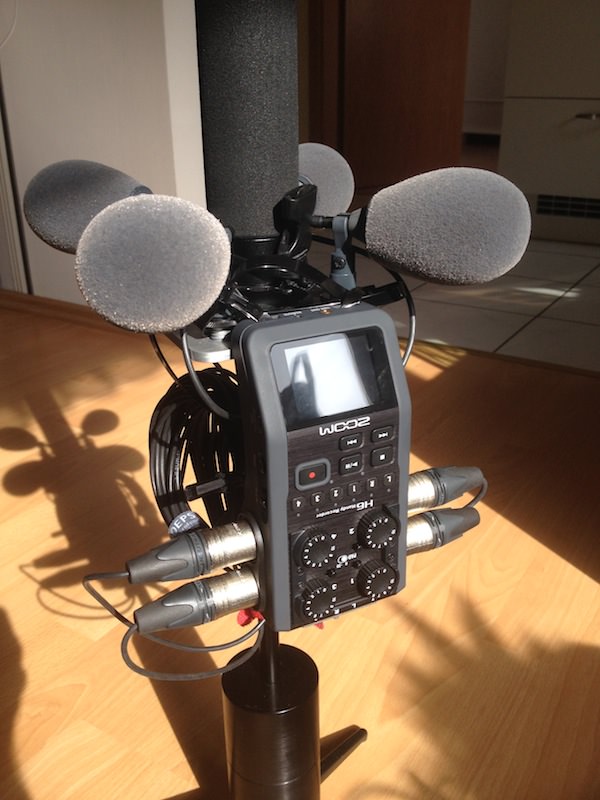 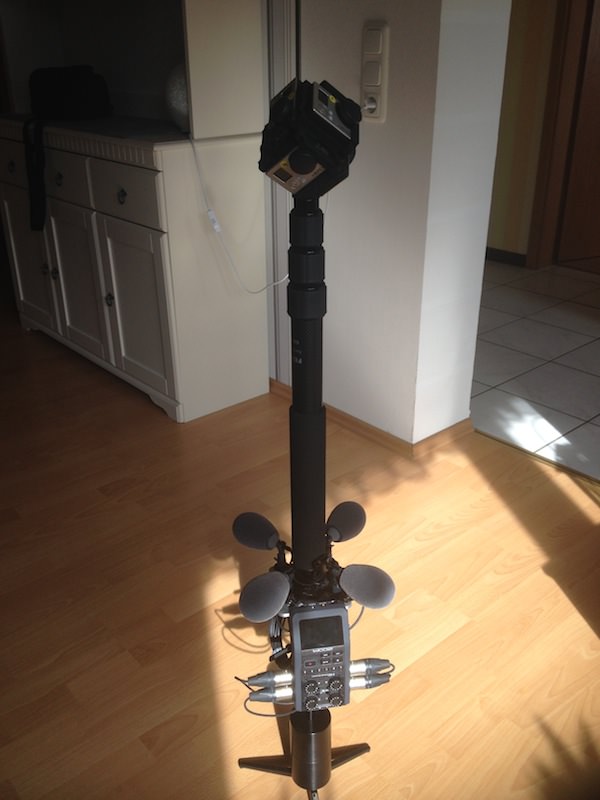 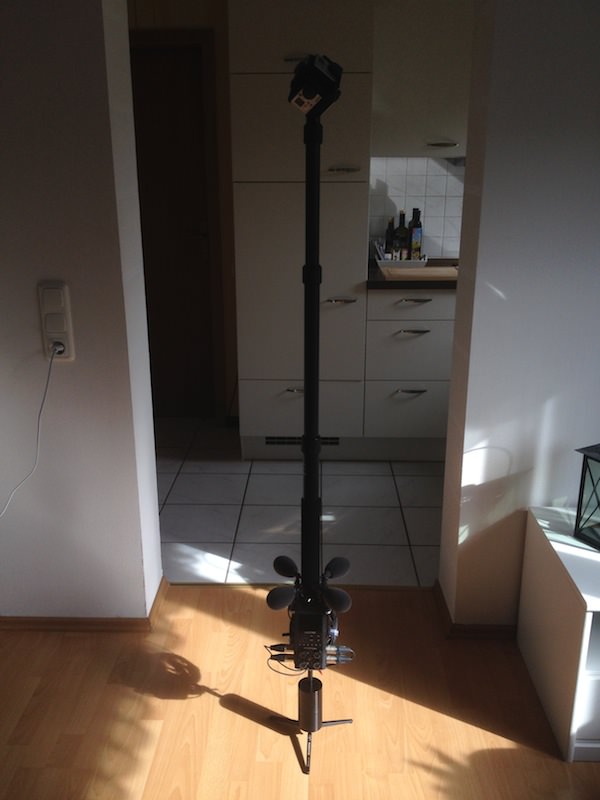 Fig. 10: View of the complete system as it would be used in the field, with monopod extended

I’m very grateful to Schoeps for creating this system and for sending it out to me so I could test what it will look like in a real-world application (i.e. mounted to the 360 video rig). The quality of the mounting plate is very solid as is the solution of the microphone clamps. Installation was very easy especially with the small Manfrotto extension pole which lifts the microphones off the ground, thus, reducing sound reflections a little bit. I’m sure that a position higher up would be better, however, this would make the rig much more obvious in the final 360 video and the patch to cover them up bigger. Apart from this, the cables seem to be a tad too close to the monopod for my liking. While I didn’t have to bend them too much, I can just see how over time they might just get a bit too much strain. This could be overcome by placing the microphone clamps about 0.5 cm further out OR by inverting the monopod and putting the smaller end at the bottom and the wider end (which is currently mounted to the plate) at the top and underneath the 360 video rig. While this works without a problem, it just looks a bit weird AND from my experience the rig gets a bit more unstable because now there’s more weight at the top and a smaller footprint of the monopod attached at the bottom, which results in more sway of the monopod. And that is actually very bad because, and this is the biggest current challenge, with the Manfrotto pole extension being so very thin, the entire system already sways pretty badly. And as we all know, sway in 360 video footage is not good because it results in people feeling a bit sick when they watch the footage in a Virtual Reality headset (e.g. Gear VR, Oculus Rift, Zeiss VR One, HTC Vive, etc.). My solution to the swaying problem would be to create a 50 cm aluminium tube with mounting plates at the top and bottom, thus increasing the contact area between the individual elements and reducing the ability of these elements to bend and sway. Whether putting the microphones further out is a good idea is also debatable because the further they are out the bigger the area will become that needs a patch. So maybe a solution where the microphones are rotated by 90° would be an option (see Fig. 11), however, then the microphone cables definitely touch the windscreen of the neigbouring microphone which will result in rubbing noises when the rig moves in the wind. I’m also not sure how this angled positioning would affect the surround sound picture because while technically the microphones are still at 0°, 90°, 180° and 270°, they are now slightly offset to the side. 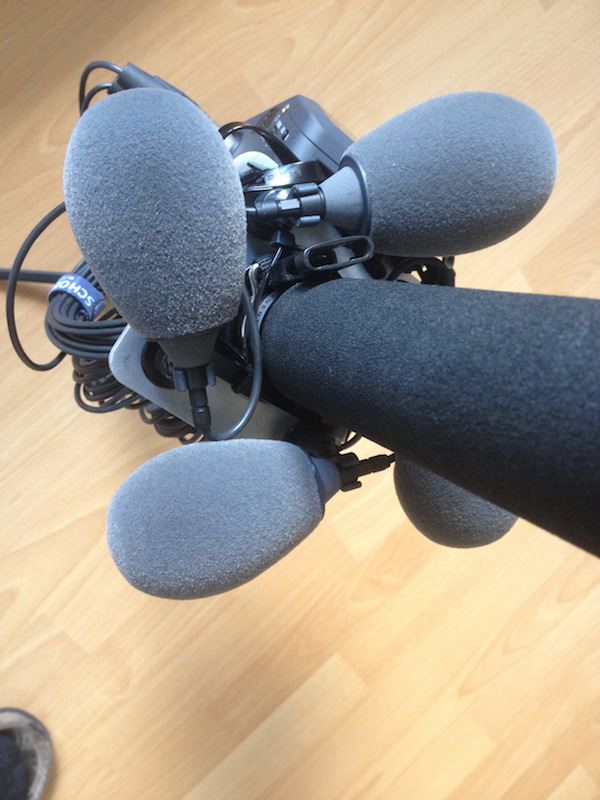 Fig. 11: Rotating the Microphones results in a smaller diameter of the solution, however, how does this affect the sound?

Maybe this is something that Schoeps or other audio professionals might be able to comment on. For me it is time to head out and make some sample recordings (with the microphones in their original and 90° positions), both audio and video, so I can see how big the footprint of this solution appears in the final 360° video footage (and how big the resulting patch will have to be) & so I have some surround sound footage from 4 directions that I can play around with. I’ll get back with some samples soon so stay tuned!

No votes yet.
Please wait...