The past year has seen a lot of innovations in the 360° video industry and sound is one of them. In this article, I share my thoughts about the new spatial/ambisonic audio microphones that have hit the market recently and how they compare to the earlier generation.

On the one side, we have the Røde NT-SF1 that is challenging the Sennheiser Ambeo VR mic. On the other side, we have the Zoom H3-VR as the long-awaited update for Zoom’s H2n handheld field recorder. I won’t be going into the details and spec differences of all these microphones because those are available on thousands of other websites. I will, however, look at the self-noise of these mics because this is something that is very important for us since we predominantly film 360° nature and relaxation videos for our Atmosphaeres 360° Stock Videos and VR Experiences. Also, I used to record nature sounds professionally with a matched pair of Røde NT5 microphones, so naturally, when Røde announced the NT-SF1, I was very interested to compare the self-noise of the NT-SF1 with that of the other spatial audio microphones. Full disclosure, the kind folks at Røde and Zoom sent us a loan unit of the NT-SF1 and the H3-VR (respectively), however, I guarantee that my impressions are 100% honest, which is also what Røde and Zoom requested from me. So this is the 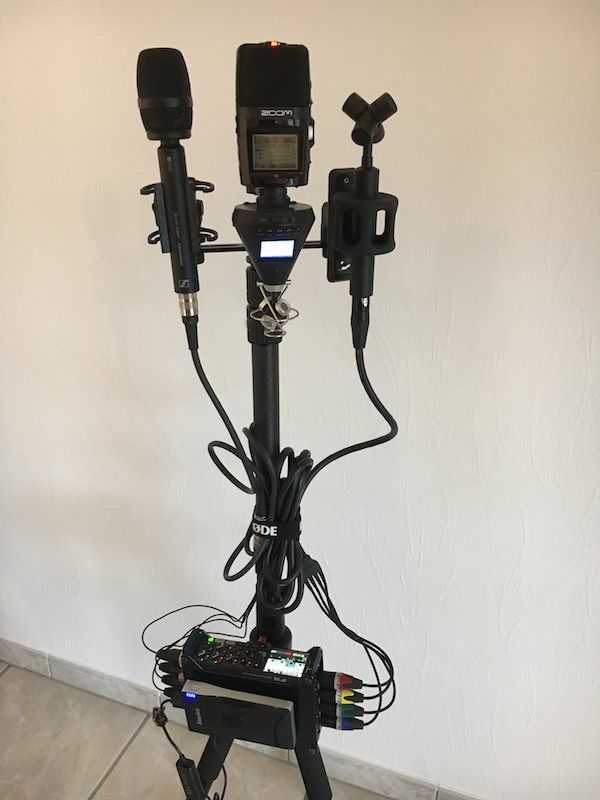 On the left we have the Ambeo, followed by the H2n in the top middle, the H3-VR bottom-middle (inverted) and the NT-SF1 on the right. The Ambeo and NT-SF1 were recorded on a Zoom F8 field recorder with channels 1-4 used by the NT-SF1 and channels 5-8 used by the Ambeo. Before anyone asks, yes, I use a USB powerbank with a 12V to 5V converter to power the F8 and yes, I have heard all the arguments for and against it. I have never had any issues with this setup, so I will continue to use it. Below is a close-up of the test setup with a little more detail.

I put the rig inside a central room in our house that is built from solid bricks and has no windows, so it is a very quiet location. All recorders were set to 24bit/48KHz with low cut filters turned off. I set the gain to 35 on the F8, 8 on the scale of the H2n and 55 on the scale of the H3, which was a medium level on all recorders so the sound would not clip when I snipped my fingers. At the beginning of the recording, I summarise what I have written up until here and then I leave the room and close the door. At this point, you will hear about 25 seconds of recorded silence from each of the microphones (see below for the files). Afterwards, I come back into the room and finish the recording. Really not much, right? And honestly, the results do not come as a great surprise (spoiler: the Røde NT-SF1 and Zoom H3-VR are my favourites).

Because all recordings had widely different sound levels, I dropped them into Adobe Audition and used the ‘Match Loudness’ functionality to create an even playing field. The loudness standard I used was ITU-R BS.1770-3 for the simple reason that it was the default setting. The following screenshot shows you the settings and results of the loudness matching. Don’t throw rocks at me if this is not your preferred standard, I’m a nature sound recordist, not an audio engineer. My job is to find quiet locations, not mix dozens of sounds for feature films. All I need is a rather clean recording to begin with and then a few tricks in Audition to further improve the recording. For those who are inclined to do their own loudness matching/volume correction, I have included the matched recordings further below. These should have all the information you need for your own experiments.

Before we get to the sound recordings themselves, let’s take a look at the spectrograms of each of the loudness matched recordings.

First up, this is an overview of the entire recording (of the Røde NT-SF1). You can clearly see the quiet area from around 2:35 to 2:50. This is the area that I was most interested in.

The next screenshot shows you this 2:35-2:50 area zoomed in on the Røde NT-SF1. Click on the screenshot for a higher resolution image or click on the button below the screenshot to hear the entire recording. You can also download the recordings from all microphones further down so you can load them into your own DAW and zoom into the silence area.

Listen to the Røde NT-SF1 Self-Noise 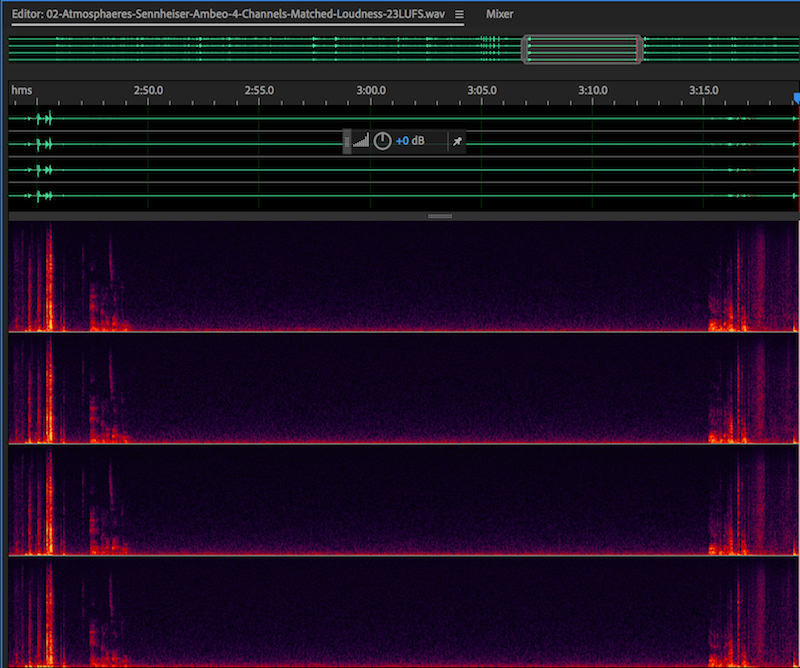 Listen to the Zoom H2n Self-Noise 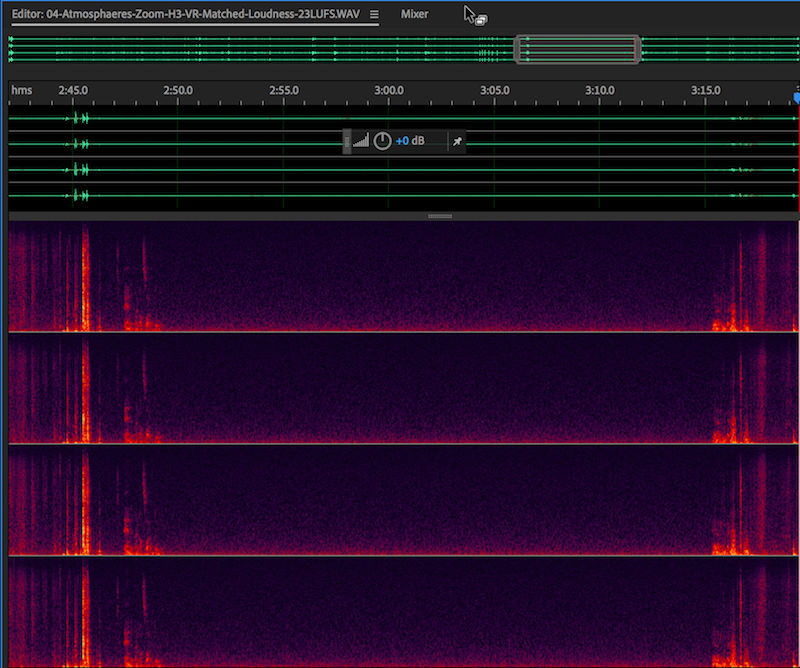 Listen to the Zoom H3-VR Self-Noise

While spectrograms don’t give us the full story, they are already very clear when it comes to the H3-VR and H2n. The self-noise of the H3-VR is a lot less than that of the H2n, which you will also hear when you listen to the recordings. So the H3-VR is certainly going to be our go-to solution for recordings where we need a quick setup. Again, I’m not going to talk about all the other new features (e.g. true ambisonic recording, automatic orientation recognition, etc) in detail here but the H3-VR clearly is a winner and will replace the H2n in our equipment bag.

Of course, our bigger interest was for the NT-SF1, which we are going to use in quieter locations where we have more time for setup. After this test, I can clearly say that I prefer the NT-SF1 a lot over the Ambeo VR Mic. I believe that the self-noise of the NT-SF1 is a tiny bit lower than that of the Ambeo, although, this would not necessarily be the only deciding factor because the difference is so small that it is almost not worth arguing about. But even if both mics would exhibit the same self-noise, the NT-SF1 is absolutely the better microphone for the simple reason that it is a whole €500 or so cheaper than the Ambeo and that is not even counting the popshield/blimp and windjammer that are included with the NT-SF1 package and that you have to purchase in addition to the Ambeo. At this price point, the Røde NT-SF1 is a clear winner and my new favourite spatial audio microphone, especially in combination with the Zoom F8, which is a perfect match for spatial audio microphones.

Angelo Farina, a member of our Facebook Spatial Audio in VR/AR/MR group took the recordings and performed some additional analyses of both, the loudness-matched as well as the original recordings. Below are the graphs from these analyses. Please note that I am a nature sound recordist and not a sound researcher, so any questions about these graphs should be directed to Angelo Farina. 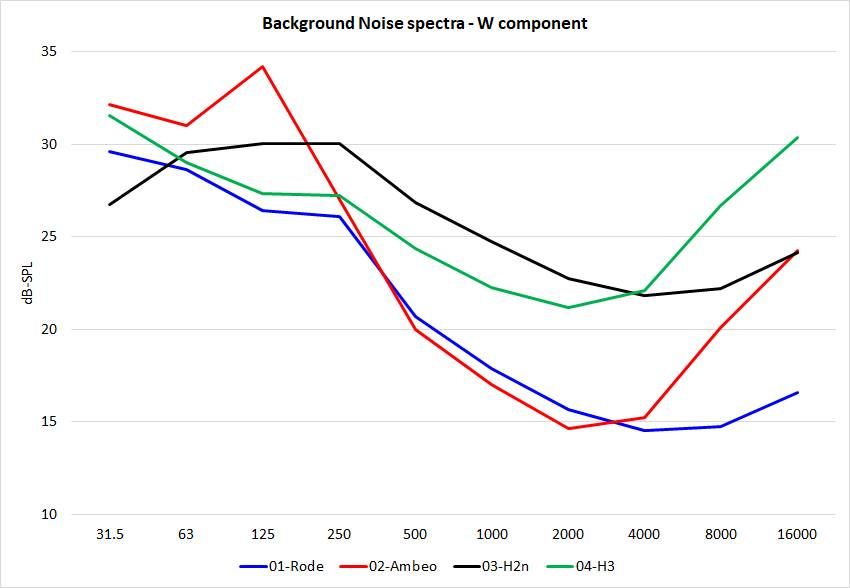 The values to dB SPL in octave bands, plus total A, weighted for channel W in the above graph are 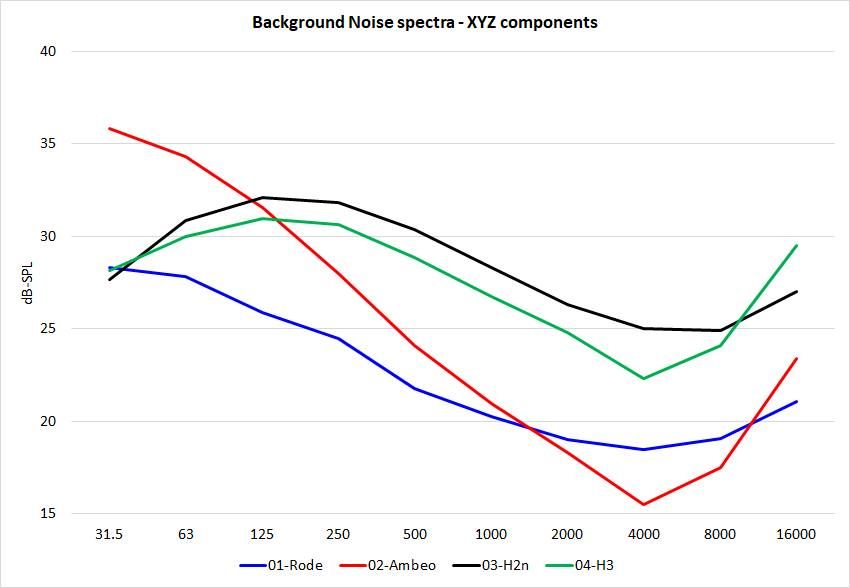 Below are the original, unaltered recordings. The silence area is between 2:25 and 2:50

The following download contains the full-length recordings after loudness matching has been applied.