How I got into creating the Atmopshaeres

Many people have asked me how I got into creating 360 degree speherical videos for virtual relaxation purposes and I thought that it is about time that I explain some of my professional background as well as the motivation that drives me to create more and ever better Atmosphaeres to help people find relief from stress, anxiety, pain and that are ultimately aimed at helping you to find your happy inner self.

What sparked my interest in using 360 degree spherical videos for pain, stress and anxiety treatment was an article by Hunter G Hoffman at the Human-Interface Technology (HIT) lab in Washington which I read after discovering in my PhD work VirSchool – The effect of music on memory for facts learned in a Virtual Environment that congnitive overload was one possible explanation for the surprising results of my studies that contrary to my expectation, people actually learnt less from a history lesson that was delivered in a highly immersive CAVE VR display system as compared to 3 monitors that were positioned next to each other on a table. After this outcome I started to ask myself why this is the case and found the cognitive load theory by John Sweller. In a personal conversation John Sweller confirmed that “for new technology, students need to become familiar with that technology prior to it being used to learn something else. Learning how to use the technology and learning the curriculum area information simultaneously can impose an overwhelming cognitive load. The technology and the curriculum area should be learned serially rather than simultaneously.” Encouraged by this possibility I continued my search of studies where cognitive overload had been found to be the reason for reduced ability to learn a subject matter. During this search I then came across Hunter Hoffman’s research which is highly relevant and influently to my work and I am thus going to explain it in a bit more detail. 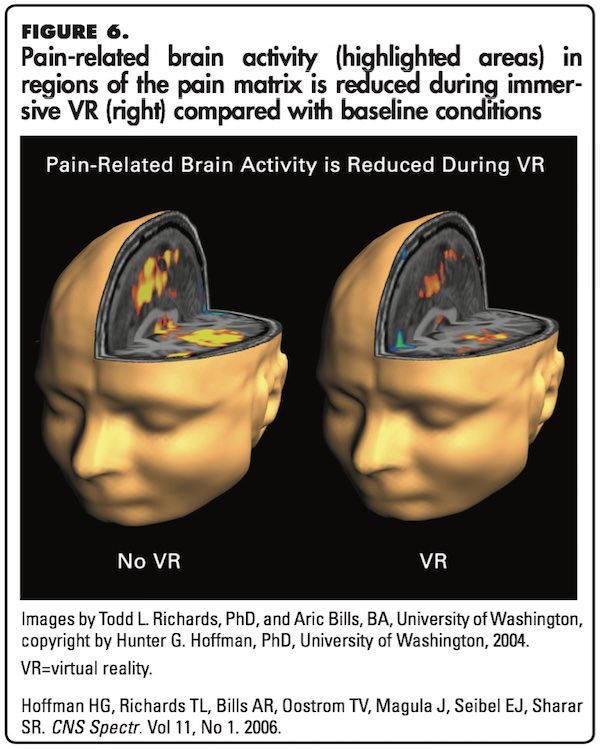 Hoffman and his colleagues used a head-mounted display (HMD) that was showing a virtual snow world scene to patients who were receiving burn wound treatment. The use of this Virtual Reality system helped to significantly reduce the pain that the patients experience and their findings further show that high levels of visual immersion significantly reduce experienced pain, unpleasantness and the time spent thinking about pain as compared to low levels of visual immersion. According to Hoffman and colleagues, the reason for the effectiveness of the immersive VR system is that the human brain can only process a certain amount of information at any given time (Sweller cognitive load theory) and because the VR system requires a lot of attention it leaves “less attention available to process incoming neural signals from pain receptors”. It’s like a pipeline that can only have so much water flowing through it – if half of the pipeline is blocked by highly engaging visual and auditory stimuli the brain needs a certain amount of processing power to process and interpret the information and this processing power can not be used for interpreting pain signals. So it’s not that the pain receptors aren’t firing (they still do), it’s just that the pain signals don’t get through to the brain as well as without a VR distraction. Immersive VR distraction technique is very effective way with statistically significant reductions in analgesics that can be given to patients. This is highly beneficial for the patients because of the reduction of side-effects but it is also beneficial for hospitals and doctors because a reduced amount of analgesics means lower costs per treatment. 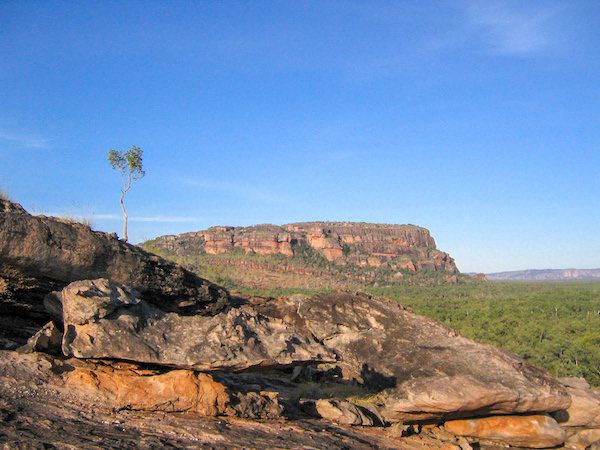 Many years before reading this research I was working as a tour guide in Kakadu National Park. One day I stood on top of Nourlangie Rock with wide open space all around me, wishing I could give that feeling of freedom to other people. Looking in every direction and experiencing the beauty of this nearly untouched wilderness I was trying to find a way to capture this 360 degree panorama as a video and put it into a VR headset. At the time (approximately 2005) no hardware was available for this kind of immersion so there was nothing I could do to make my dream come true. Instead, I started my PhD in 2006 and about 7 years later when the first VR headsets (Oculus Rift DK1) became available, my interest for Virtual Reality, nature sound recordings of peaceful places and 360 video came together. Reading Hunter Hoffmans research paper was the moment when I thought “Wow, I can actually do something good with something that I love doing (being out in nature and finding peaceful and quiet places to enjoy)”. In the meantime I have found many more research papers that show other effective uses of VR (e.g. for stress and anxiety treatment) but it was another 1 or 2 years until I had all the technology together (VR Headset, 360 video camera, stitching software, knowledge etc.) to produce the Atmosphaeres that can help with these conditions. If you want to try them yourself, take a look at our existing catalogue. Before purchasing, please download the demo first to make sure that the videos run on your display device. If the Atmosphaeres help with your condition then please send us your feedback or testimonials. We always love to hear from you 🙂

No votes yet.
Please wait...