A recent study conducted at the Bundeswehr Hospital in Hamburg found that viewing a 360° nature video in a Virtual Reality (VR) headset has a relaxing effect on stressed individuals. The effect is significantly better than when the video is watched on a PC screen, showing that the use of 360° nature videos in VR is very effective in reducing stress and more so than watching a nature video on a regular screen.

The study ‘Exposure to virtual nature: the impact of different immersion levels on skin conductance level, heart rate, and perceived relaxation‘ by Thiemo Knaust and colleagues, is based on the Attention Restoration Theory by Kaplan and the Stress Reduction Theory by Ulrich that demonstrate that exposure to nature is beneficial to reduce stress. While exposure to real nature is widely accepted to have stress-reducing and mood-enhancing effects, access to real natural environments is sometimes limited, for example for people who live in big cities, those that are confined by e.g. lock-downs during the Covid-19 pandemic or those that are otherwise in isolated and confined environments, such as hospitals, age-care facilities, etc. Hence, such people who cannot access nature, may benefit from virtual nature presented in a VR headset. This study set out to test the effectiveness of watching a 360° nature video in a VR headset, for relaxation purposes.

The study by Knaust et al. “examined whether a monoscopic 360° beach video presented with a HMD (Head-mounted Display aka VR headset) is significantly more relaxing than the same video presented via a PC screen, or no video at all.” The video that was used in the study was a 5-minute version of the 7-minute clip ‘Beautiful Hidden Bay Beach Waves Close Up‘ (see below) from the 300+ clips strong Atmosphaeres 360 stock video library. The researchers presented the beach video in either a VR headset (HTC Vive) or on a regular PC monitor. There was also a control condition in which study participants sat quietly at the desk for five minutes without listening to any sounds and with the PC monitor turned off. 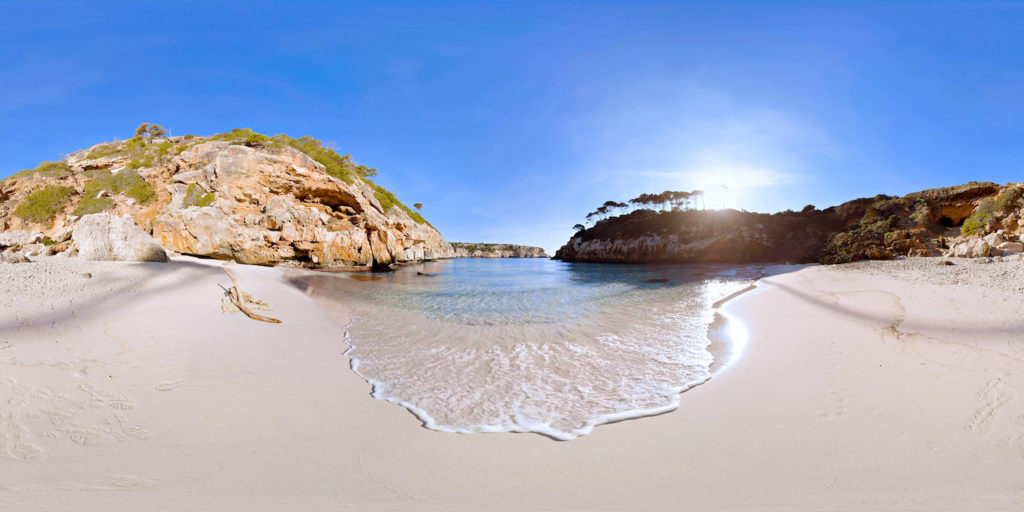 In line with the researchers’ hypotheses, “the HMD condition was rated significantly more relaxing than the other conditions, with no significant differences between the PC and control condition.” In other words, study participants were more relaxed after they watched the 360° beach video in the VR headset than after they watched it on the PC monitor. Additionally, and surprisingly, “the PC condition was not perceived as significantly more relaxing than the control condition”, which means that watching the beach video on the PC monitor had no benefit over sitting quietly at the desk with no visual stimulation. Thus, it does not matter, in terms of a relaxation effect, whether stressed people who need a break just sit at their desk with the monitor turned off or watch a nature video on the screen. However, to achieve a significatly higher level of relaxation, watching a 360° nature video in a VR headset is very beneficial.

The research study by Knaust and his colleagues shows that taking a 5-minute break by watching a 360° beach video in a VR headset is significantly more relaxing than watching the same beach video on a PC screen or sitting in silence. An additional literature review in the same article also showed no clear difference in positive/negative affect between real and virtual natural environments. While some studies found differences, others didn’t. This, together with the results from another study by Browning et al., who showed that virtual nature can be just as effective as real nature in terms of relaxation, means that if we want to reduce stress and re-gain productivity, we can either go out into nature or, if this is not possible, watch 360° nature videos in a VR headset, to achieve a similarly relaxing effect.

If you are considering offering your employees a quick, cost-effective and proven relaxation option with monoscopic 360° nature videos for VR headsets, then you can start by taking a look at our 360° stock video library or get in touch with us for a free consultation.

For those interested in all details, the full study by Knaust et al. is available as an Open Access publication at